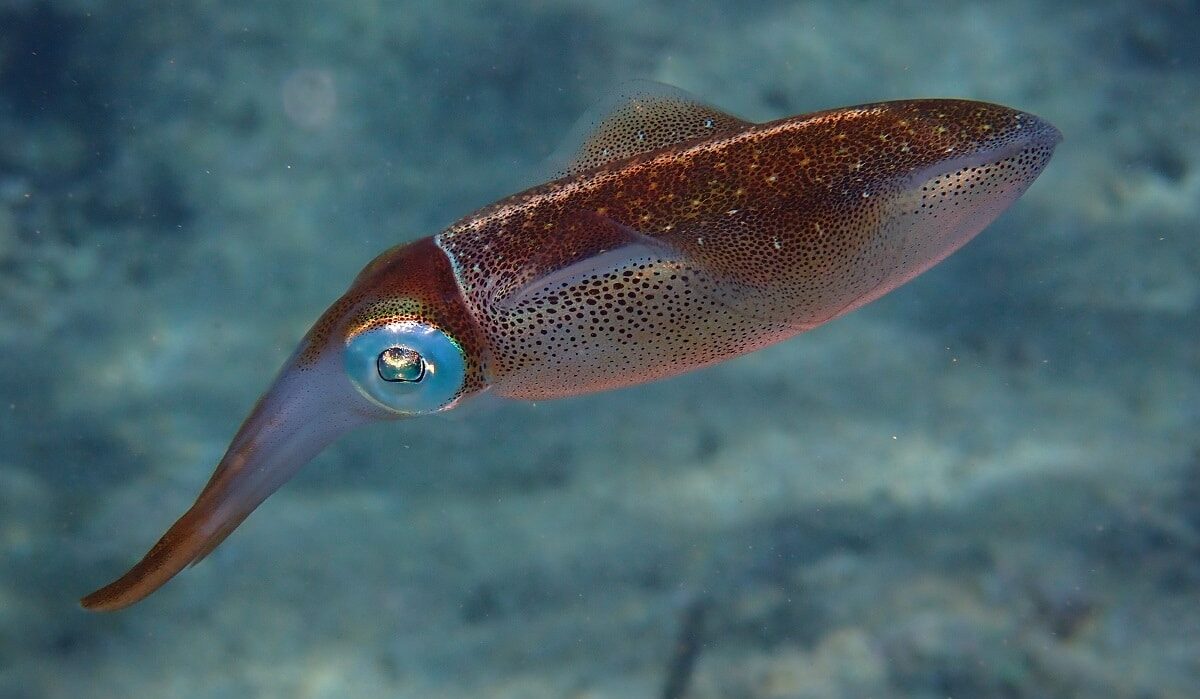 Did you come across a pack of small, inquisitive and colorful squids while snorkeling in the Caribbean? You probably just met the Caribbean reef squid, one of my favorite species to spot in the shallows. Colorful and not too shy, they’re entertaining and fascinating to see.

Let’s have a closer look at this unusual squid species. Keep reading for everything you need to know about the Caribbean reef squid!

When I first spotted a small group of Caribbean reef squids, I figured I’d stumbled upon a posse of strange cuttlefish. Nope! Although they sport similar undulating fins on the side of their torpedo-shaped body, these guys are absolutely squids. They form part of the family Loliginidae, the pencil squids.

These squids, which are scientifically known as Sepioteuthis sepioidea, have 10 arms in total. Eight are short, while two are long and feature suckers to help reel in prey. Their eyes are very large in comparison to their bodies.

Although it’s only about 8″ (20 cm) in length, the Caribbean reef squid is truly a mesmerizing sight to see. Its base color is brownish with shimmering speckles, but that can change if one of these squids feels threatened, spots members of its group or wants to mate. They can change color! If you approach a group while snorkeling, you’ll likely see them flash a range of hues and patterns.

Using chromatophores and iridiphores, skin color cells that can expand or retract to show different levels of color, the Caribbean reef squid and many other cephalopods can change their colors and patterns extremely rapidly. In the case of this species, they do so in order to help them communicate, flirt and for camouflage purposes.

The squids can take on a huge range of different appearances. One 2008 study, for example, refers to patterns like “‘eye spots’, ‘all brown’, ‘flashing’, ‘clear’, ‘plaid’ and ‘dark arms’”. A 2016 paper talks of “Zebra and Saddle-Stripe displays” being involved in the mating process, as well as an “on-off Flicker”. There are apparently around forty in total!

Did you know? Aside from its colors and patterns, the Caribbean reef squid also uses different postures to communicate.

Planning your next snorkel trip?

As its name suggests, the Caribbean reef squid is common in the Caribbean Sea. It can also be found around Florida and the Bahamas.

While snorkeling, your best bet to spot them is in shallow reefs or hiding in tufts of turtle grass. They travel in shoals and can look like fish from a distance, but their movements give them away. The species is quite unique in the fact that it gets so close to the coast, especially during the day.

Although this species is known as “reef squid”, groups of adults can apparently be found at up to 100 meters. They go to these depths at night, likely to hunt for small fish and shrimp.

If you have any more questions about the Caribbean reef squid or if you’d like to share your own experiences with this colorful cephalopod, don’t hesitate to leave a comment below!

Mather, J. A., Griebel, U., & Byrne, R. A. (2010). Squid dances: an ethogram of postures and actions of Sepioteuthis sepioidea squid with a muscular hydrostatic system. Marine and Freshwater Behaviour and Physiology, 43(1), 45-61.

Moynihan, M., & Rodaniche, A. F. (1982). The behavior and natural history of the Caribbean reef squid Sepioteuthis sepioidea with a consideration of social, signal, and defensive patterns for difficult and dangerous environments. Fortschritte der Verhaltensforschung.

Underwater noise maker | Should you get one?

Hey! I'm Marijke. I'm here to help you find the best snorkel beaches, identify marine critters and enjoy life under the sea to the fullest.

More crabs! This is the arrow crab, a Caribbean na

Sharing is caring 💙 I had never seen so many sp

I guess sometimes the best shot is just above the

In Curaçao, you don't have to go diving to see go